Originally described by Hermann Boerhaave in 1724, Boerhaave syndrome is defined as a spontaneous rupture or breakdown of the esophagus with a full-thickness tear due to a sudden increase in intraesophageal pressure combined with relatively negative intrathoracic pressure, caused by straining or vomiting. The tear commonly occurs at the left posterolateral aspect of the distal esophagus, which is the weakest point of the esophagus, and may extend for several inches.1-3 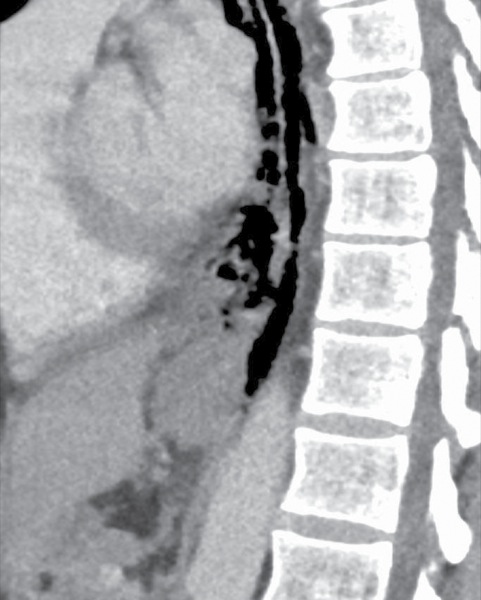 Iatrogenic causes of esophageal rupture account for approximately 80% to 90% of cases and are usually from medical instrumentation (endoscopy or paraesophageal surgery). Other causes of spontaneous perforation include caustic ingestion, pill esophagitis, Barrett’s esophagus, infectious ulcers in patients with AIDS, and following dilation of esophageal strictures.

In contrast, the term Boerhaave syndrome is applied to the 10% to 15% of esophageal perforations caused by vomiting. Because the perforation is usually caused by forceful vomiting, it is not truly spontaneous. The rupture results in a transmural perforation of the esophagus, which differs from Mallory-Weiss syndrome, a nontransmural esophageal tear that also is associated with vomiting. However, an untreated Mallory-Weiss syndrome can develop into a rapidly fatal Boerhaave syndrome.4 Indeed, distal esophageal tears, rather than constituting a distinct entity, may be part of a spectrum of diseases, and a partial lesion of the esophageal wall caused by barogenic injury may evolve into a full-thickness rupture following further barotrauma. Left untreated, mortality is high.

Diagnosis of Boerhaave syndrome may be delayed since a history of esophageal damage or lesions often does not exist, although if such pathology has been documented, mortality is increased. Moreover, the syndrome also is associated with overeating and excessive alcohol intake—conditions that often cause vomiting and gastric distress.

The incidence of Boerhaave syndrome is low, estimated at 3.1 per 1,000,000 persons per year, which may include underreporting.5 Not infrequently, diagnosis is made at autopsy.

Boerhaave syndrome has been reported in all races and globally. Males are more frequently affected, with male-to-female ratios ranging from 2:1 to 5:1. The syndrome occurs most often in patients 50 to 70 years of age, and 80% of all patients are middle-aged men. However, a few cases have been reported in neonates.6 Some reports note that the esophagus is 13 times stronger in neonates and 4 times stronger in children than adults. Perforations in neonates usually occur on the right side.

Diagnosis of Boerhaave syndrome may be difficult because the classic symptoms of Mackler’s triad of chest pain, vomiting, and subcutaneous emphysema are absent in about 30% of cases.7Mediastinitis, sepsis, and shock are frequent complications later in the course of the condition, making diagnosis more difficult.

Chest radiographs are abnormal in up to 97% of cases and are highly suggestive of perforation. Almost 80% of cases have a left pneumothorax plus an effusion.3 At least 90% have an effusion with or without pneumothorax, which is bilateral in 7%. Mediastinal air should be suspected and is present in 66% of cases. Widening of the mediastinum is occasionally seen. Subcutaneous emphysema in the soft tissues of the neck or chest wall may be obvious. The mediastinum may be shifted if there is a tension pneumothorax. Other confirmatory studies include CT scans, esophagograms, pleural amylase levels, and esophagoscopy.

Because airway compromise may be present, full resuscitative facilities should be readily available. Tube thoracostomy may be required to decompress the chest of gastric contents and, occasionally, pus.

Patients with Boerhaave syndrome are in critical condition. Morbidity and mortality increase exponentially with delay in treatment. Rapid resuscitation through large-bore cannulae with warm IV fluids must be started prior to induction.

The risk for aspiration on induction is high. Any increase in intraabdominal pressure should be avoided to prevent further leakage of fluids into the pleural cavity. Coughing and straining should be avoided as they may increase further tearing of tissue that is already inflamed and friable. Sudden development of bilateral tension pneumothorax has been described shortly after induction.8

Insertion of a nasogastric tube is not recommended because any instrumentation can aggravate the esophageal injury or pass through the tear. A rapid sequence induction is indicated. Awake intubation is a possible alternative if retching, coughing, or straining can be avoided. Succinylcholine may increase intraabdominal pressure due to fasciculations and increase reflux. A defasciculating dose of a nondepolarizing agent does not reliably attenuate this rise in intraabdominal pressure. Rocuronium, 3 to 4 times the ED95, is a reasonable alternative. Cricoid pressure has been associated with esophageal rupture, and its use during rapid sequence induction and intubation in patients with esophageal rupture is controversial.

Often, patients are in the early stages of septic shock and may become hemodynamically unstable with any reduction in afterload. Etomidate and ketamine are suitable induction agents. Intravenous inotropic agents should be available.

Lung separation usually is required to facilitate surgical access during thoracotomy. A double-lumen tube, or a single-lumen tube with a bronchial blocker, should be available. Confirmation of placement should be performed by fiber-optic bronchoscopy.

Arterial cannulation should be used with standard ASA monitors, and urinary catheterization. Fluid replacement is better managed by assessment of pulse pressure variation than central venous pressure monitoring. Major blood loss is to be expected and volume should be maintained by infusion of colloids, crystalloids, and blood components.