Midazolam is a benzodiazepine that at low doses is widely used in periprocedural care settings to assure amnesia and produce anxiolysis and sedation, while high doses are less frequently used to induce hypnosis (unconsciousness). Midazolam is also used to acutely suppress seizures. The molecular targets mediating these drug effects are γ-aminobutyric acid type A (GABAA) receptors in the central nervous system, pentameric ligand-gated chloride channels that, when activated, hyperpolarize neurons and suppress their activation. This is the vastly oversimplified story we teach medical students, omitting many detailed scientific discoveries and unanswered questions that make the story of benzodiazepines fascinating, multifaceted, and open-ended. Important questions include the following: What types of GABAA receptors mediate the various neurobiologic effects of benzodiazepines? What are the relevant neural circuits mediating those effects? How are GABAA receptor subtypes distributed in those circuits and associated glial cells? Can pharmacologically targeting benzodiazepine sites selectively treat neurologic disorders? A new piece of that story is introduced in this issue of Anesthesiology in an article by Puig-Bosch et al.  emerging from an international research collaboration. The elegant experiments described by Puig-Bosch et al. use tissue from transgenic animals containing mutations that eliminate midazolam sensitivity to explore the role of specific GABAA receptor subunits in neural circuits involved in amnesia, sedation, and hypnosis. The major findings, telegraphed in the title, implicate α1-containing receptors in midazolam effects on the neural circuits that were studied.

These experiments are based on knowledge gained from decades of research into benzodiazepine molecular sites of action and neuronal circuits, using an ever-growing set of research tools. The key experimental approaches scale from molecules to animals, spanning genetics, protein structural studies, electrophysiology, neuroanatomy, pharmacology, and behavior. The molecular pharmacology of benzodiazepines helps us understand the strategy used by Puig-Bosch et al. Nineteen GABAA receptor subunits are encoded in the human genome: α1 to α6, β1 to β3, γ1 to γ3, δ, ε, Φ, π and ρ1 to ρ3.  Among many thousands of possible pentameric subunit combinations, only a few dozen exist in neurons and glial cells in the central nervous system. Classical benzodiazepines like midazolam target typical postsynaptic receptors that contain two α subunits, two β subunits, and a γ subunit, arranged as depicted in figure 1. This configuration was first proposed based on functional electrophysiology studies of genetically engineered subunit assemblies that constrained their arrangement, and later confirmed with cryo-electron micrography.  Photolabeling and cryo-electron micrography locate benzodiazepine binding within the extracellular interface between the α and γ subunits, near a histidine at position 102 in α1.  These sites are structural homologs of the extracellular pockets where γ-aminobutyric acid binds between β and α subunits, paralleling evidence that benzodiazepines act as allosteric coagonists.  Electrophysiologic studies of GABAA receptors containing different subunits revealed that classical benzodiazepines enhance activation when the α1, α2, α3, and α5 subunits, but not α4 or α6, are included. The benzodiazepine-sensitive α subunits all contain histidines at positions homologous to α1H102, while α4 and α6 contain arginine residues. Mutating these histidines in benzodiazepine-sensitive α subunits to arginines renders receptors benzodiazepine-insensitive. 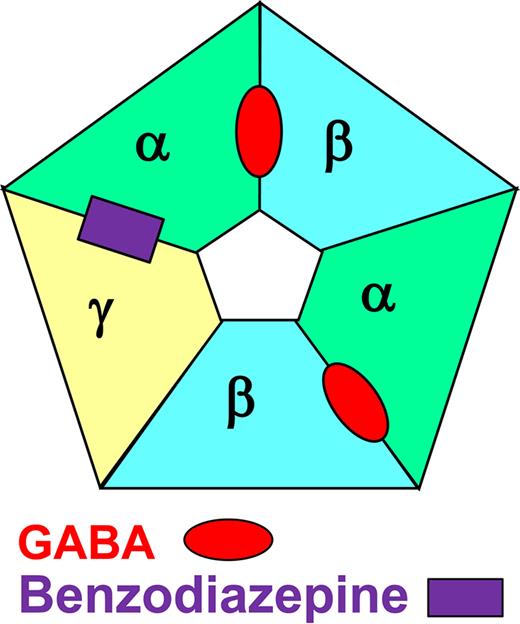 A diagram depicting the arrangement of subunits in typical synaptic γ-aminobutyric acid (GABA) type A receptors and the extracellular intersubunit binding site locations for GABA and classical benzodiazepines.

Members of the research collaborative created “knock-in” transgenic lines of mice with histidine-to-arginine mutations in each of the four benzodiazepine-sensitive α subunit types: α1-KI, α2-KI, α3-KI, and α5-KI. By cross-breeding these lines, they also created triple-mutant lines of mice with only one benzodiazepine-sensitive α subtype. Thus, in α1/2/3-KI, α1/3/5-KI, and α2/3/5-KI lines, respectively, benzodiazepines affect only α5, α2, or α1 receptors. From an interpretive standpoint, these knock-in lines are ideal for establishing whether a particular α subtype is both necessary and sufficient for a particular outcome. In that case, the single subtype knock-in should eliminate the benzodiazepine effect, while the complementary triple knock-in should retain benzodiazepine sensitivity.

These transgenic mice have previously been studied using various behavioral tests for distinct benzodiazepine effects, indicating that α1 receptors contribute to sedation, amnesia, and seizure protection, while α2 receptors mediate anxiolysis and muscle relaxation. Other experiments support a significant role for α5 subunits in learning and memory as well as amnesia caused by benzodiazepines or etomidate. Indeed, α5 is highly expressed in the hippocampus, which is part of the neural circuit responsible for memory formation. However, α5 receptors often contain δ subunits that are associated with increased γ-aminobutyric acid sensitivity, lack of benzodiazepine sensitivity, and extrasynaptic localization on neurons.  Thus, it remains uncertain which α subunit(s) are important for benzodiazepine-induced amnesia.

To bridge murine behavior with relevant neural circuits, Puig-Bosch et al. studied electrophysiologic effects of midazolam exposure in brain slices from wild-type and transgenic mice. The phenomenon known as long-term potentiation in hippocampal CA1 regions is an established correlate of memory. Long-term potentiation in hippocampal slices was observed as prolonged enhancement of field potentials in response to low-frequency stimulation after a brief high-frequency “training” activation of Schaffer collaterals in another part of the hippocampal circuit. For correlates of sedation (low-dose midazolam) and hypnosis (high-dose midazolam), decay rates of inhibitory postsynaptic currents were measured in voltage-clamped neurons in both hippocampal slices and cultured cortical slices. Here, the effect of midazolam in wild-type neurons is to reversibly prolong the decay of inhibitory postsynaptic currents, which are mediated by synaptic GABAA receptors. The results implicate α1 receptors, echoing previous behavioral studies, but also add a twist in the long-term potentiation outcomes, suggesting a novel model involving an interaction between other types of hippocampal GABAA receptors on different neurons in the circuit. Future studies should test this hypothesis. The postsynaptic current decay studies also need follow-up to further explore the roles of non-α1 receptors.

In vitro neural circuit experiments have both advantages and disadvantages relative to studies in live animals. A major advantage is that the experiments can be done with precise control of midazolam concentrations in fluid bathing the brain slices. In contrast, experiments in live mice cannot be done under conditions of steady-state benzodiazepine concentrations in the central nervous system. Pharmacokinetic factors (absorption, distribution, metabolism, and excretion) result in continuously varying concentrations after drug administration, and midazolam, a short-acting benzodiazepine, is particularly challenging. Limitations to these approaches include the high likelihood that other brain regions contribute to the behavioral effects of interest and that the relevant midazolam concentrations associated with various behavioral effects are uncertain.

The results of Puig-Bosch et al. represent scientific progress toward mapping GABAA receptors in neurons, glia, and neural circuits, connecting physiology and pharmacology to brain function and dysfunction.  Such work is of fundamental importance for understanding neurophysiology and relevant pharmacology. From a more practical perspective, GABAA receptors can be viewed as an important set of drug targets that play key roles not just in perioperative medicine but also in various neurologic disorders. Benzodiazepines, other benzodiazepine-site modulators, and investigational compounds that selectively target a growing set of GABAA receptor allosteric modulator sites may evolve into future drugs that provide subtle modulation at specific receptor subtypes. Examples include nonsedating nonamnestic anxiolytics and cognitive enhancers. Thus, this unfolding research story may influence the future of medicine.